Srinagar 24 March (KNB): As rains continue to lash plains of the valley, the resultant waterlogging in several areas of the summer capital of Jammu and Kashmir, Srinagar, is causing immense difficulties to the citizens.

The same issue faced by the residents of Barthana area of Qamarwari, where rainfall has turned the internal lanes into water channels.

Speaking to Kashmir News Bureau, a resident of the area, Hidayat Bukhari said that from past three days the water level in the lanes has risen to the extent that it’s entering inside their homes.

“Our houses are getting damaged due to the water logged here,” the resident said, adding that, “Everyone here has to put on long boots to go out to buy necessary things for their families.”

Furthermore, he said that they have approached several officials regarding the construction of pipe drain including manholes at P.C depot crossing Barthana Parimpora but so far no action has been taken.

Water levels have reached near to the knee height in the area, entering houses and even a mosque located in the area.

He further said that most of the families have taken their children and elderly to other areas, as there is high risk of infections and diseases due to the accumulation water all around the area.

Similarly, students of Amar Singh College, Srinagar, are troubled due to the water logged inside the campus.

The visuals (lies with KNB) depict that there is no convenient way for the students to walk inside the campus as the accumulated water has submerged the pathways. 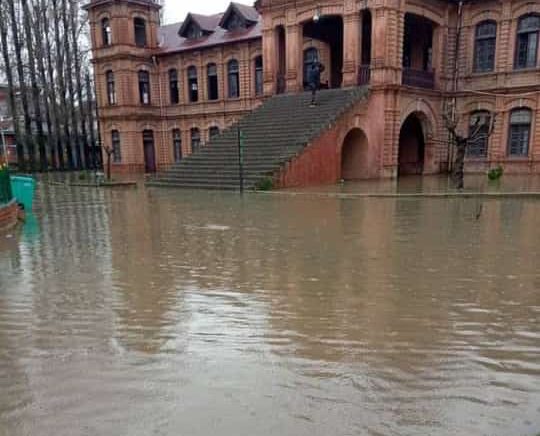 Moreover, there are several other area where waterlogging and drainage failure has made everyday life difficult for the people.

Pertinent to mention that plains of the valley, especially Srinagar, witnessed rainfall for last 3 days but Meteorological Department of Kashmir today, predicted that weather will remain dry until the end March. (KNB)